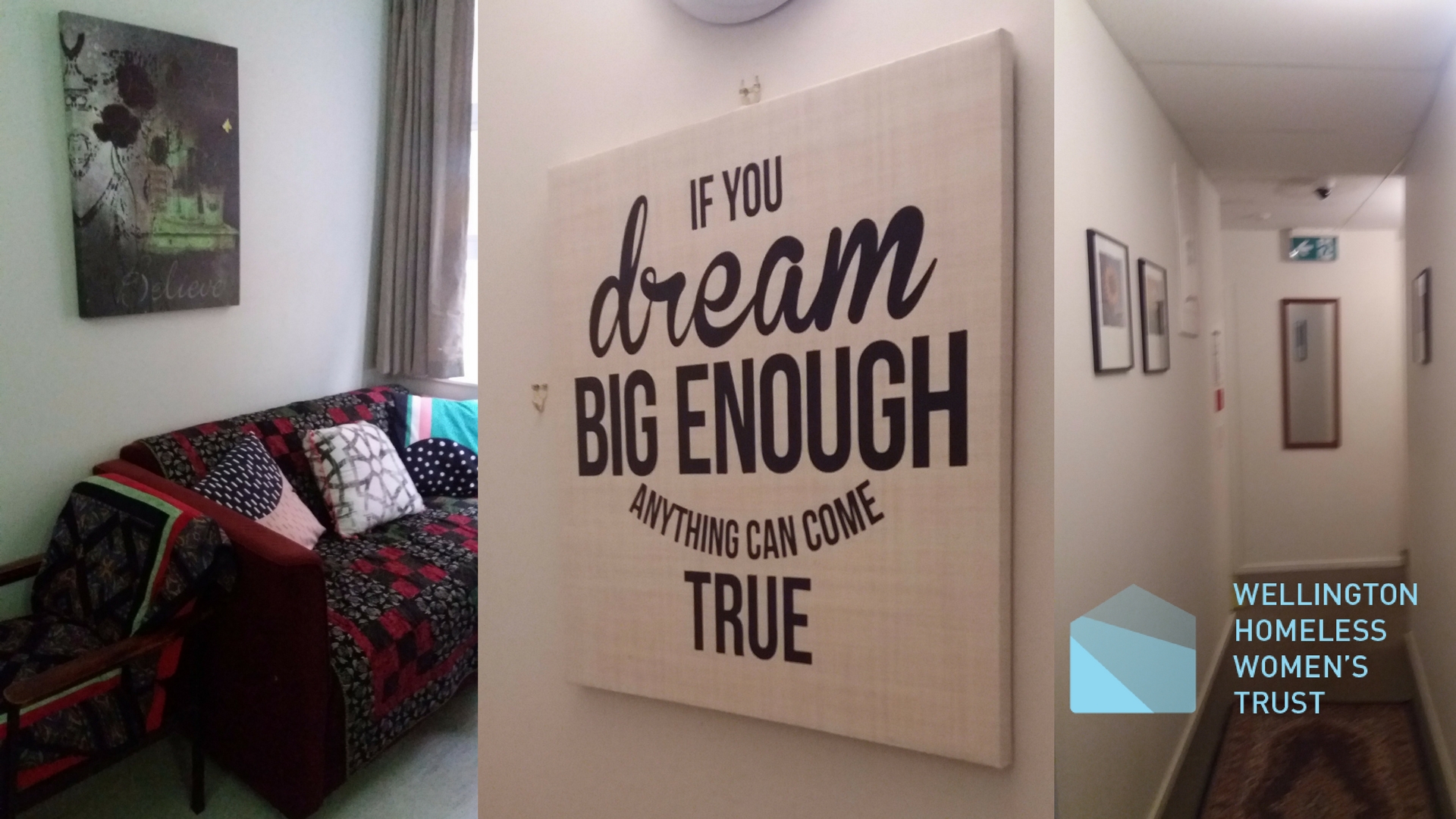 “Our referrals can be quite diverse,” says Paula. “They sometimes come to us from transitioning from prison, the hospital or rehab.” Tenants also come to the Trust from ‘sleeping rough’ on the streets or in cars. Or they may have just arrived in the region after fleeing abuse. All of the women arrive with their own story and their own experience of homelessness – and of trauma. “People feel very vulnerable when they don’t have shelter.”

Take Joan* for example who moved in a week ago.

“I’m allowing her to settle in and I’m not asking lots of questions,” says Paula. “I’ve had to work hard to make her feel safe and keeping her inside is top of the bill. She doesn’t trust buildings and she doesn’t like to be inside.”

Located down a nondescript lane in Central Wellington and tucked under a multilevel building, it’s pretty hard to find WHWT. And they like it like that.

There’s security camera’s at the door and inside. This helps the women feel protected, safe. “We always ask if there’s a protection order we need to know about before they can come and stay here.”

No males are allowed on the premises and all the women have one common denominator – they just need that ‘stepping stone’ to safer and more secure housing, says Paula.

It’s only for single women and invariably it’s full.

Sena* is a refugee and has been in New Zealand for two years. She was living in Pilmuir House in the Hutt when Red Cross contacted Paula about her after they realised Sena* was locking herself in her room. “The Red Cross contacted me because where she was staying was bringing up trauma from her past and this was the reason she was a refugee. Being in a woman’s only house was the only option for her to feel safe.”

Originally set up in 2013, WHWT was the result of several homeless women having to spend the night in the central police station with nowhere to go. Sister Marcellin Wilson, Karen Holland, Sister Catherine Hannan and Sister Raye Boyle, worked to interview over 20 agencies to see if there was a need for transitional housing for women in Wellington — there was. While the Trust’s preference was for emergency housing, budget constraints meant they had to go for the transitional housing option.

Sister Marcellin Wilson “We decided that there was no point in going ahead unless we could make it work financially so we then had to find funding.” Many of the religious orders gave generously, as have a number of individuals and organisations.

The Trust relies on donations for its operation. “Having no government contract can be an asset as it allows the flexibility to be responsive,” says Paula. “I don’t have to work to targets that don’t always make sense. I can work where the need is.”

Paula is also involved in advocacy work on behalf of the women. This can mean supporting women get emergency housing through WINZ and a number of them have had to stay sleeping on the streets for days while the WINZ processes are worked through. “We are not able to offer ‘emergency beds’ currently as we don’t have the funding for the staff required to offer this level of service,” says Paula.

The house isn’t staffed for 24 hours a day so Paula needs to be confident that a woman is ready to enter the house and that she has the ability to manage herself in the house safely. House criteria have been set up to keep everyone in the property safe, and the property itself safe. The main objective is to support as many women as possible with providing a safe and comfortable space where they can focus on a support plan to move on.

The Trust receives referrals from a variety of Wellington-wide agencies. Having an established relationship with most of these agencies helps to streamline the process and make it easier for the women to come into the service.

The Trust works closely with Downtown City Ministry, the Soup Kitchen, PACT, Māori Women’s Refuge and the Wellington Women’s Refuge, amongst others. “Being part of the various interagency groups, such as Te Kakano, means better support for the homeless people we work with,” says Paula. It is s also a member of Te Mahana, a Wellington Strategy to end homelessness and has MOU’s with other networks such as Te Rito, Family Violence Network.

Paula is required to make safe and ethical decisions, sometimes based on little information, so her role is crucial. She hasworked in the homelessness sector in central London for many years in a variety of capacities from outreach and managing teams of substance-use workers. She’s been working within the homelessness, addiction and mental health sector in Wellington for almost eight years.

“There’s a skill to engaging people on the street. Asking the right questions, keeping yourself safe – it needs a consistent familiar face. And there are many aspects that are specific to these women that need to be considered, such as the abuse and discrimination they may have had to cope with in their lives that have caused obstacles to their progress. Many of the women we work alongside have been invisible for most of their lives.”

The majority of the women coming through the service have experience of trauma, and some have ongoing threats to their safety. Their time in the house is often a time to reflect on their past and feel motivated to make the necessary changes to move forward.

Tenants are given the opportunity to stay for up to three months and provided with caring support and personal advocacy. This includes creating a support plan with each resident on arrival to assist in addressing the issues relating to their homelessness, turning their lives around, and re-establishing themselves. The Trust then assists in finding each woman safe sustainable accommodation.

“From the beginning to the end we want to be supporting women to move along to do the best that they can.”

Read more about the Trust and the stories of the women they are supporting, here. You can also support the Trust through the 14HoursHomeless event which is happening on the 13th October 2017.

* Not her real name