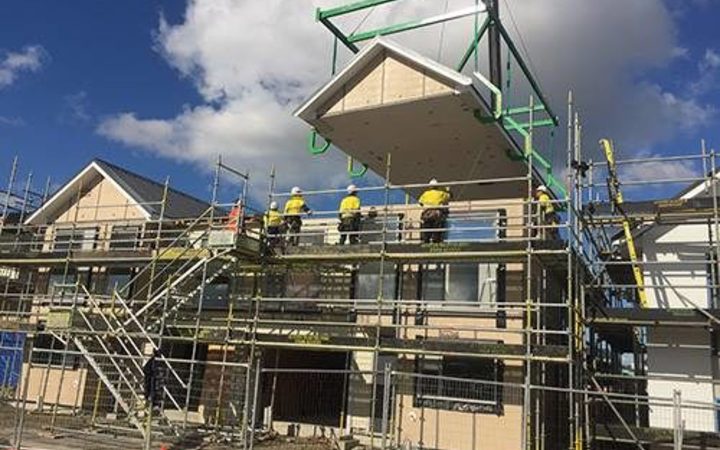 Save Our Unique Landscape has been fighting Fletcher’s plans to build the large housing development. Photo: Supplied / Fletcher Building

The controversial project has met with fierce opposition and protesters had previously said they would not be deterred should the court rule against them.

The Ihumātao and Ōtuataua Stonefields Historic Reserve in Mangere is home to New Zealand’s earliest gardens and is on land considered wahi tapu by local hapū and iwi.

The group Save Our Unique Landscape has been fighting Fletcher’s plans to build the large housing development on land bordering the stonefields.

Most recently the protesters asked the Environment Court to overturn Heritage New Zealand’s go-ahead for the development.

But the court, which released its decision yesterday, declined the application.

It has previously said the areas’s significant archaeological sites will be protected, stressing that the development will not be on the Otuataua Stonefields themselves.

Tune in here to listen to Vic Crockford, CE of Community Housing Aotearoa, Paul Gilberd, GM Community Finance and Imogen Schoots, founder of Forever Affordable Housing talk with Bernard Hickey about housing affordability and the opportunities the sector is creating to...

Community Housing Aotearoa’s three pre-conference work programmes are kicking off next week with initial zoom meetings in the Narrative Transformation and Housing System Settings streams scheduled for Tuesday 26 January at 10AM and 1PM respectively. Issues papers to...

Tune in here to listen to Vic Crockford, CE of Community Housing Aotearoa, Paul Gilberd, GM Community Finance and Imogen Schoots, founder of Forever Affordable Housing talk with Bernard Hickey about housing affordability and the opportunities the sector is creating to...

CHA Level 4 Guidance Document 8 September Community Housing Aotearoa (CHA) has put together this document to consolidate information, contacts, resources and advice to help you in your day to day service delivery and decision making. It will be updated as new...

Message from CHA's Chief Executive, Productivity Commission Submission - Include Housing in the Terms of Reference, CHA's support for members, sharing ideas and issues, Ministry of Health information and advice, Government support for your organisation, important...

This report looks at the question: why don’t landlords choose features that exceed the minimum building standards and what are the enablers to changing this? The aim is to identify the barriers to an improved rental stock and potential solutions to overcome the...