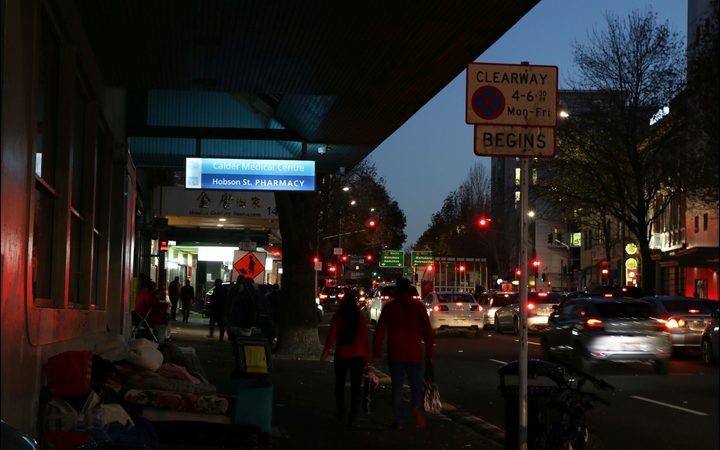 Hobson Street in central Auckland is home to apartment blocks, hotels, businesses and traffic. The high concrete buildings turn this main road into a gusty wind tunnel. On the eve of the first day of winter, it’s cold.

Outside the Auckland City Mission, a line of makeshift mattresses form a temporary dormitory along the organisation’s wall and a group of people with their bags and blankets are milling around the entrance. Just up the road someone has erected a green canvas bivouac in an alcove. This scene is not uncommon.

Last month, the government said it would try to get everyone into a home this winter but groups working with the homeless community said demand for emergency housing and services was through the roof.

De Paul House manager of emergency housing Jan Rutledge said demand for their 23 units had skyrocketed this year. In her 14 years of working in emergency housing, she had never seen such a high turnover in the units.

De Paul House is at full capacity with 79 people, including 46 children, and has a constant waitlist of 10 families.

Emergency housing providers across the country felt like everything had “ramped up a notch”, she said.

“The pressure on our people and services like us is intense.”

In May, the government unveiled a pre-budget $100 million plan to tackle homelessness, including making 1500 transitional and emergency homes available this winter.

But those working on the frontlines were yet to see evidence of this new funding – but that wasn’t the main issue, Ms Rutledge said.

Housing providers were still limited by the number of units they had and “all the money in the world” would not change the basic problem of lack of supply.

Salvation Army head of social services Pam Waugh said smaller centres struggled to keep up with increased demand and agreed there was a stream of working poor who could not afford private rental.

“There’s still not enough to meet housing, food, warmth, medical costs – all those things that a family has going on for them.”

Ms Waugh said some of the new funding trickled through to providers but the government needed to build at least 2000 state houses a year to meet demand – four hundred a year more than what it had committed to.

People who had been turned away from the social housing waitlist were now being accepted which showed the Ministry of Social Development (MSD) and Housing New Zealand were “working collaboratively to get people housed.”

“We’re busting a gut to really make an improvement here.”

The government brought in 540 new houses around the country since April and they were “working hard” to make sure people got the support they need.

Mr Gallacher said the government hoped to create 1500 new houses by the end of winter.

Last month, housing minister Phil Twyford said he wanted to ensure everyone was housed this winter.

MSD could not confirm how many homeless people it housed since the funding announcement.

Read the story on Scoop here.