Inequality after housing costs is significantly higher than before housing costs. While incomes have risen for high and low earners, the rising cost of housing especially hits the poor.

The report: The Inequality Paradox: Why inequality matters even though it has barely changed was released on 18 October by Dr Bryce Wilkinson and Jenesa Jeram and can be read here.

One of their key findings is:

Higher housing costs hit those on lowest incomes hardest. In current circumstances, public policies relating to housing are important whether the concern is inequality or deprivation.

The graph below shows the differential effect of rising housing outgoing-to-income ratios (OTIs) across income quintiles (where quintile 1 is poorest and 5 is richest). The proportion of households with OTIs greater than 30% rose markedly between 1998 and 2015 for each of the bottom three quintiles. In contrast, it was the same in 2015 as in 1998 for the top quintile. 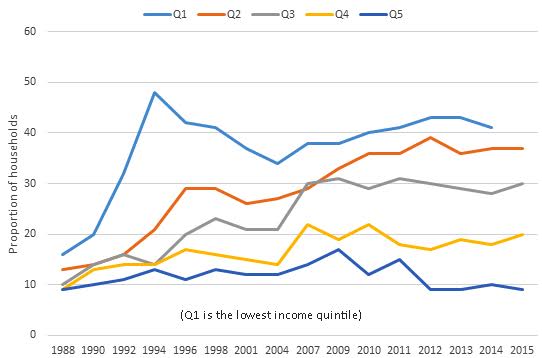